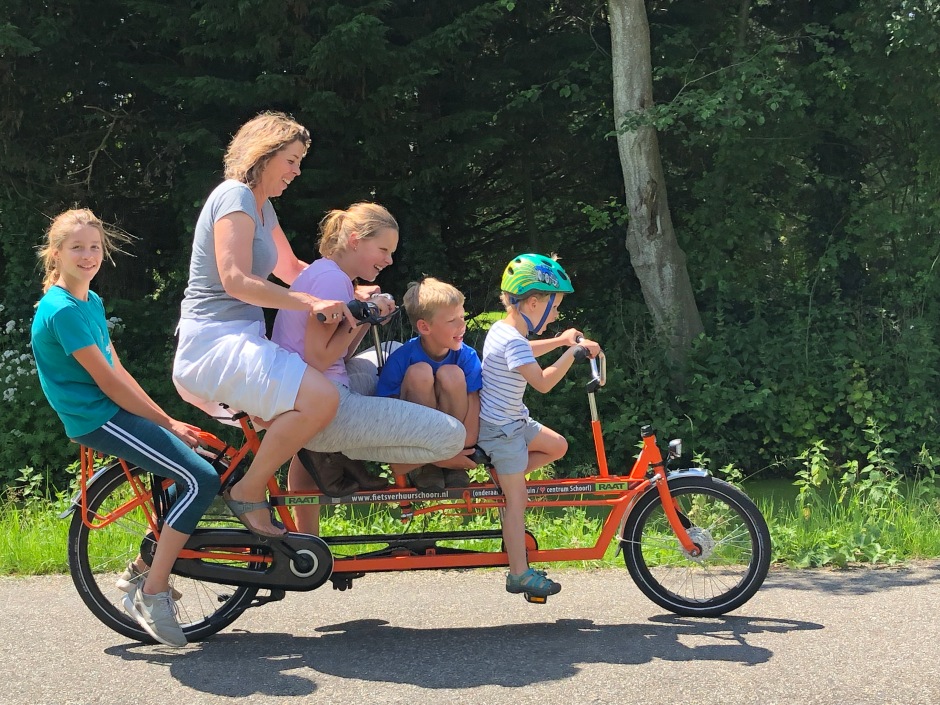 A native of the Netherlands and a graduate of the Waldorf teacher training program in Stuttgart, Germany, Marieke Duijneveld joined the MWS family two years ago as a mom to four students before taking a place on our faculty last year as a parent-child teacher. In the fall of 2020, Marieke took the lead in the Morning Glory kindergarten class, where she leads twice-weekly song-filled play-based hikes in the hills around school. Read on to hear how Marieke’s free spirit and a love for adventure has propelled her across the world and all the way to Marin County.

Tell me a little bit about your background. Where are you from and where did you grow up?
I am from the Netherlands, from a little town close to the coast—right near the polders, or reclaimed land. In the Netherlands, a lot of the land is created, because it’s below sea level, so they pump the water out and create land.

My father was a teacher in a public school, but when I was two, he became a Waldorf teacher. I went to a Waldorf school from preschool through 12th grade. We biked to school every day. We used the car to go on vacation or to visit my grandparents, who lived two hours away, but we never used it for school—only on my birthday! That was very special, because on my birthday my mother baked a treat to share with the other children in my class, and so we had to drive to school to bring it. Otherwise, rain, shine, snow, we always biked.

I was a very dreamy child. I had a vivid imagination. I would go into the woods with my friends in long dresses without shoes. I always dreamed of traveling, my ideal was with a covered wagon pulled by a donkey.

Did you imagine yourself being a teacher growing up?
Not at all, because both my parents were teachers, and they taught at the school I went to. I thought I’d never be in that same situation with my own children!

And now you work at the school where your children go!
Well, at least I don’t teach them.

What did you parents teach?
My father was a class teacher—but in the Netherlands, there aren’t many subject teachers, so the class teacher also teaches subjects, like form drawing, music, English, German, gym. My mom was the woodwork teacher.

When I was 16, my father took his sabbatical and we moved to Sweden for a year where we lived on a farm with adults with special needs. I went to a school that wasn’t a Waldorf school. It was a huge shock! But it was good for me, and helped me to appreciate Waldorf education.

Then you went back and graduated from the Waldorf school?
Yes, and then I went to college and I met my husband while in college. We were in the students’ choir, and one weekend we were all on the train and someone found out I went to a Waldorf school.

He called to Jasper, “Hey, Marieke, also went to Waldorf school!” So we sat together and talked about woolen underwear and no TV, and so on, and that was it!

How did you end up in California?
When we were both 28, we wanted to move abroad. I had a dream: Let’s start an orphanage in Argentina! I was looking for something adventurous—something that sounded very far away. My husband is a bit more realistic. A friend of his worked at Weleda and it’s an international company, so Jasper applied to Weleda, and was hired in a role in Germany. Moving to Germany did not feel as adventurous as Argentina. And there were no palm trees!

Since we’d moved to Stuttgart, I decided to attend the Waldorf teacher training. I didn’t speak German very well, so I needed to find something to help me learn the language. I loved it. I studied to be a class teacher, and I taught in a local Waldorf school after graduating. Then our first daughter was born, and our second daughter soon after that.

When Jasper was asked to lead Weleda North America, we had to decide whether we would move to the United States. At first, it didn’t sound appealing to me. But we both like adventure, so we said, let’s do it and see what happens. We moved to Chestnut Ridge, New York, a little north of New York City.

We loved it there. I didn’t know much about the U.S., and the people were so helpful and so nice. It was nice to live close to New York City, because we could just go there for a night, for instance to Carnegie Hall. We loved the Waldorf school our children went to. In the Netherlands, all Waldorf schools are public charter schools, none of them are fully independent, private schools. So children have to take tests and the curriculum is heavily influenced by the public school system. The education at Green Meadow Waldorf School in Chestnut Ridge felt so much closer to what I think Steiner intended with Waldorf education.

I worked as a parent and child teacher, and later as a kindergarten teacher at Green Meadow Waldorf School. After a total of 10 years in New York, it was time for something new. I still missed those palm trees and wanted to go to California. So we chose to move across the country and embrace yet another adventure here in Marin!

Tell me about being a mom to four children. That’s a lot of kids!
Yes it is a lot. And I love it!

I always wished for a large family and am so grateful to have four wonderful children. There is an anecdote about how to deal with a large family. With one child, both parents have their hands full, with two, it’s really, really busy but at least you have two hands, and in my case a partner. Three is stressful because you’re trying to stay in control, with four you just have to give up trying to keep everything under control.

Working with children in kindergarten every day inspires me to be a better mom. And vice versa, my experience as a mom probably also helps me professionally.

Kindergarten is different this year, but are there any upsides to early childhood during COVID?
It is wonderful to be outdoors more than before. We added more hike days to the program, which I otherwise maybe wouldn’t have done. Being on these hikes in nature with the children is so sweet. We go to places where there aren’t any toys, and they just play! They play for an hour and a half without taking a break, and they enjoy being in their dreamy worlds.

It’s lovely to be in kindergarten and to help create a world that is good, and forget about everything else that is going on.

Also, I love that the groups are smaller as a result of the Covid pandemic. It seems to benefit the children socially. It feels more natural.