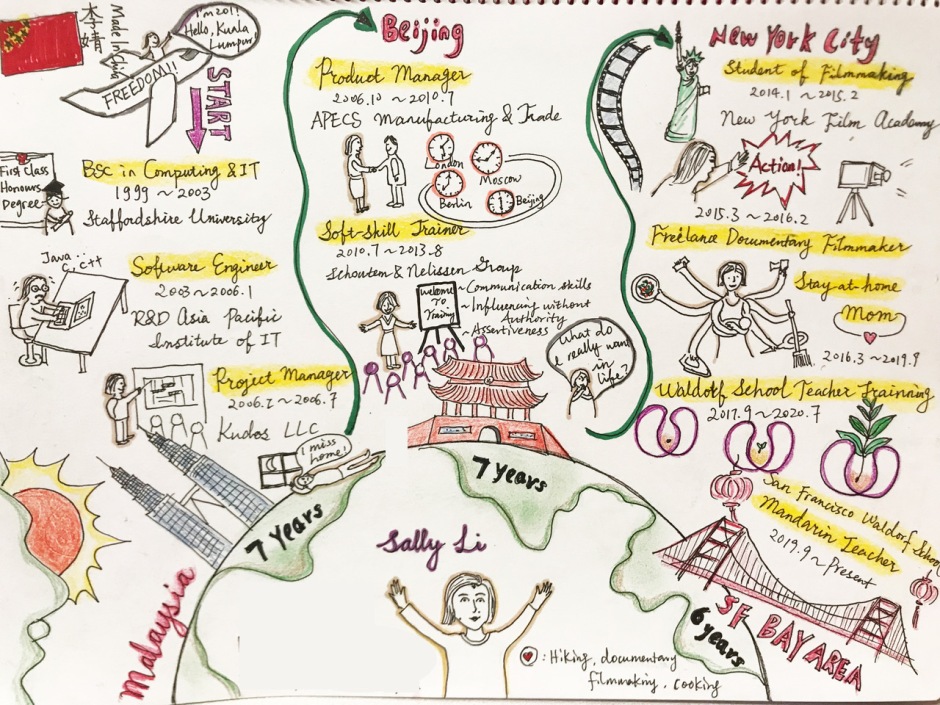 Raised in Zhangzhou City, China, Sally Li has followed her heart around the globe and through diverse careers before she joined the faculty at Marin Waldorf School this fall, where she currently teaches Mandarin to grades 2, 3, 4, and 5.

“I don’t know how I make my decisions,” Sally says. “I just feel it. Something is calling me.” Those instincts brought her to Malaysia at age 20, prompted her to leave her corporate job in Beijing to pursue a career in filmmaking, and eventually led her to Waldorf education. Read about it all (and see her short film!) below.

Tell me a little bit about your background. Where are you from and what was your childhood like?
I’m from Zhangzhou City. It’s in the middle part of China. I have some friends who say it’s like Nebraska.

My childhood was really free. In China, at that time, in my surroundings, moms tended to be very controlling and always focused on academics. My mom wasn’t like that. She trusted me. I could play with boys and I loved adventure. I was a wild little girl.

We lived in a huge military compound and my dad was a teacher at the academy. There were people there from all across China, and they spoke many different dialects. I grew up in that type of inclusive surrounding, where people speak different languages but we are all neighbors.

What brought you to Malaysia?
A lot of my decision-making is very ad hoc. I was studying hospitality at the university. A Crown Hotel and a Holiday Inn had just opened in the city, and they went to my university to pick a few students who would work in their hotels after graduation. I was one of the two who were selected. My parents were super happy! I had a job already, even though I was still in school!

One day I was riding my bike and I rode past a storefront that said something like, “Go Overseas!” I went in, they told me what they did, gave me some options of where I might go. The next day I brought my dad there with me and told him, “I’m interested in this.” That was the beginning.

My dad had a friend whose daughter wanted to go to Malaysia, but she was introverted. She didn’t want to go alone. My dad said, “Why don’t you take a break for the summer and go with her to Malaysia?” After that, there was no return. I came back to China and said, “I’m not going to take that job. I’m going back to Malaysia.” I really liked the tropical weather and the blue sky, and everything was new. It was mind-blowing.

Seven years later I went back to Beijing for a project assigned by the company I was working for in Malaysia. I fell in love with Beijing all over again. I decided to come back to China. I was in Beijing for 6 or 7 years. At that time, I was doing soft-skill training, teaching corporate people how to communicate, how to influence without authority, leadership skills, and so on.

One day I was training a bunch of IT people on how to ask powerful questions. I used myself as a real case scenario. I told them I felt a little bit stagnant in my job and I wondered if there was anything else I could do with my life. There was just a tiny little bit of feeling in me. I still loved that job. I just brought myself as a case for them to practice on. I wasn’t expecting anything.

They asked me, “What is the thing you always wanted to do but you never had the chance?” I said, “Be a movie maker!”

The next question was: “What was the last movie that you watched that inspired you?” I told them Life of Pi.

They asked, “What do you like about that movie?” I said, “I like the feeling when he encounters the tiger. At that moment, I felt very connected to the movie.”

I took one month off my job. I went to Beijing Film Academy to do a workshop led by the New York Film Academy. After that, I quit my job and I went to New York.

To New York City?
Yes, I went to New York City for a year to study fiction filmmaking. I learned the skills, but I wasn’t drawn to narrative filmmaking. I found I was more interested in documentary. I told my teacher, but it was too late to change course. It was a two-year program. For the final project, everyone made their narrative films and I did a documentary anyway, and many people were touched by it.

What was the film about?
It’s about mystical coincidences. It’s about 15 minutes.

Around that time, a friend invited me to San Francisco to film the experience of a tour group that focuses on spiritual learning. I fell in love with San Francisco! So then I came here. I got married, had a son, and when my son was 9 months old, I felt very disconnected. I almost went into depression. I thought, I need to save myself. I need something that connects me to myself. I emptied myself and I couldn’t feel myself anymore.

I had a feeling it had to be something to do with education, because I’d just had a boy and I wanted to be a good mom as well. I found Waldorf Teacher Training. I went to the three-day Visiting Day program and after the first day I said, “I’m enrolled!” Life changed again, for the better. The teacher training really helped me to reconnect with myself.

How does it feel being a new teacher?
The hardest thing isn’t the content, it’s classroom management! I started teaching at the San Francisco Waldorf School, with the 2nd grade and the 6th grade. Even though they are just a few years apart, they are a very different group.

I started handing out questionnaires—asking what kind of pets do you have, how many siblings do you have, what are you most scares you. I wanted to build a relationship. I want them to know that they can trust me and this is going to be fun. That act alone made them feel that their teacher wanted to know about it—and then they were really into Mandarin! (Below, see some of the beautiful work Sally’s students created at San Francisco Waldorf School.)

Now I’m starting at Marin Waldorf and I’m learning more every day. I just love it. The students bring me so many surprises. Sometimes, I take ideas from students in one class and apply it to another class. It’s not coming from me. I’m just a carrier!

Tell me a little bit about the things you teach, and how you build a connection to Chinese culture.
The first class I had with them, I brought pictures to help create more connection to China. You never know who has a connection to what—food, Kung Fu, panda. I did a puppet show for 2nd, 3rd, and 4th grade. I received so many compliments from the students. I’m still exploring new and different ways to teach. I see them having a good connection with me. They are learning! There are still things I want to improve. I want to make my lesson more beautiful.

I’m going to bring more Chinese literature and storytelling to the class. I’m preparing The Monkey King’s Journey to the West—it’s a spiritual journey, in a way, a Chinese version of the Odyssey. And later we’ll bring more ancient idiom stories. Which is super fun! Because they have to draw the character. Like “the pot calling the kettle black.” Each four-character phrase has an ancient story behind it. I did it with the 6th grade at San Francisco Waldorf School and they loved it. That can create beauty!